11.1 This theme focuses on designated and protected landscapes within or near to Vale of Glamorgan, as well as landscape character, landscape quality and visual amenity.

11.2 Table 11.1 presents the most relevant documents identified in the policy review for the purposes of the RLDP and ISA.

Table 11.1 Plans, policies and strategies reviewed in relation to landscape

11.3 Key messages emerging from the review are summarised below:

11.4 NLCAs are defined at a broad landscape scale throughout Wales. The descriptive profiles for the 48 individual character areas highlight what distinguishes one landscape from another, with reference to their regionally distinct natural, cultural and perceptual characteristics.[171]

11.5 Many environmental resilience and planning challenges are best considered at a 'landscape-scale'. The NLCA policy-neutral descriptions can contribute to the development of national and regional policy, strategy or guidelines.

"The Vale is a distinctive, gentle lowland landscape, largely comprising a rolling limestone plateau. Glacial till contributes to its undulating topography. A variety of rural land uses characterise the area, reinforced by thick hedgerows, frequent small woodlands and trees, which create a sense of enclosure and intimacy. This is despite the proximity to large towns such as greater Cardiff, Barry and Bridgend, and a number of large built features within the Vale.

The landscape terminates abruptly at the heritage coast with vertical cliffs. There are a few sandy beaches, as well as shingle, but many images depict the exposed geology of the inter-tidal area, including bedding and pavements. There are long distance cliff top views towards Somerset. A notable feature affecting part of the coast is the large, modern, noisy, Aberthaw Power Station.

In the centre of the Vale, compact and historic settlements reinforce the area's distinctive sense of place, but with limited modern development. Yet the area has attracted many professionals, who commute to Cardiff and Bridgend, adding to the more prosperous character of places like Cowbridge and Llanblethian.

The area's historic character was shaped by Anglo-Norman influences. Norman castles and medieval villages centred on churches are key features. The registered landscape of Llancarfan is astoundingly beautiful as well as being a relatively unspoiled gem of historical evolution. All this is despite the relatively close proximity to nearby large towns."

11.8 The following key characteristics have been identified for the NLCA[173]:

11.9 In terms of the visual and sensory profile, the area forms a distinctive plateau landscape, dissected by several rivers including the Ely, Thaw and Waycock. It still evokes a strong rural sense of place with a patchwork of fields, hedgerows and woodlands and trees and extensive open, lowland, farmland.

11.10 The most iconic image is that of the Glamorgan Heritage Coast (see Chapter 10 above for further detail), where the otherwise gentle landscape comes to a very abrupt and dramatic edge, with near vertical cliffs in places, shingle or rock pavement beaches, and the occasional sandy bay to the west. From here there are long views across the Bristol Channel to Somerset and Exmoor. The coastal hinterland is typified by windblown vegetation that has resulted from the prevailing south-westerly wind exposure.

11.11 Further inland, the Bonvilston ridge forms a strong landscape element running across the centre of the Vale, reflected in views southwards across the Vale and northwards and into the South Wales Valleys.[174]

11.12 Figure 11.2 below shows the 27 Local Landscape Character Areas (LLCAs) within the Vale of Glamorgan. 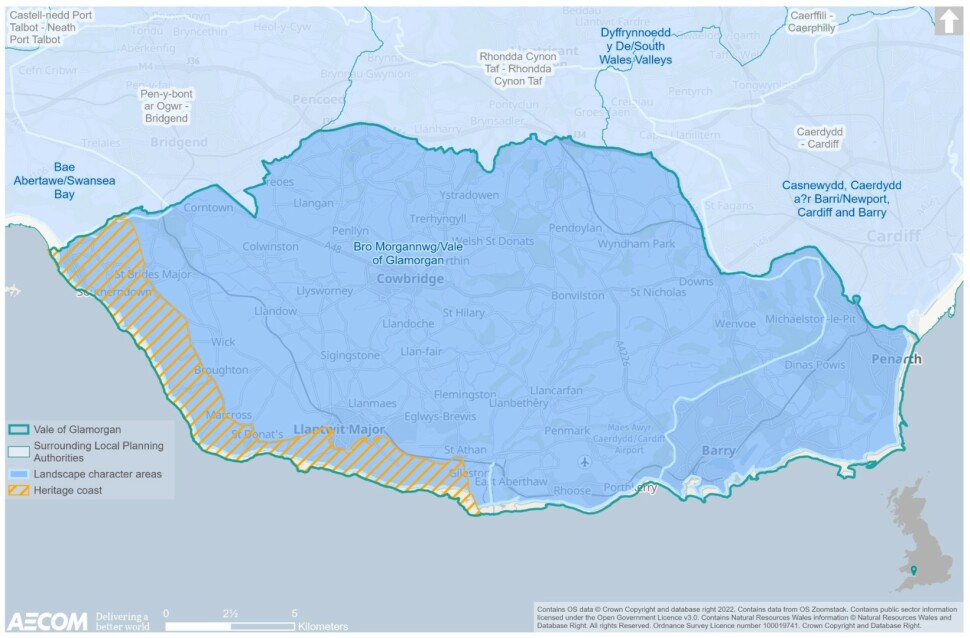 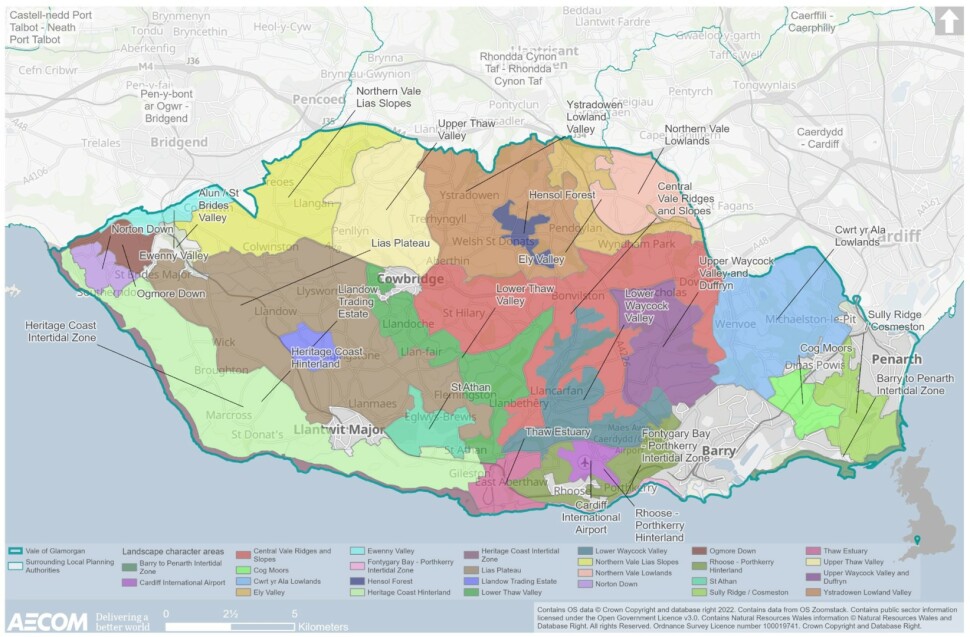 11.13 Seascapes, like landscapes, reflect the relationship between people and place and the part it plays in forming the setting to our everyday lives.

11.16 MCA 29 Severn Estuary comprises the Welsh part of the Severn Estuary, stretching from the national border with England to the western fringes of Barry.

11.17 The marine area is coincident with most of the Severn Estuary SAC (Wales) and full extent of the marine plan area. Its southwestern boundary broadly follows bathymetry, with the aim of excluding the deepest parts of the inshore channel.

11.18 The MCA also includes all of the Severn Estuary SPA, Ramsar and SSSI within the inshore and intertidal zones. It meets the coast in the west to be coincident with NLCA 35: Newport, Cardiff and Barry (developed coastline which spreads out from Cardiff Bay).

11.19 The MCA is also consistent with how the Estuary is spatially defined for the purposes of coastal navigation (e.g., Imray, 2008). The MCA excludes a small section of 'Welsh' waters along and at the mouth of the River Wye, which would be picked up by the adjacent English marine plan area.

11.21 Glamorgan Coastal Waters and Nash Sands MCA covers the coastal waters directly to the south of the Vale of Glamorgan, adjacent to the sparsely settled south-facing coastline from Merthyr Mawr in the west to the outer fringes of Barry in the east.

11.23 Offshore – in the west, the MCA takes in the full extent of Nash Sands to West Nash. It also includes Tusker Rock – a feature within the bay of Merthyr Mawr. The outer boundary with the Bristol Channel (MCA 28) is informed by the change to deeper water and large linear sand and gravel sediments associated with the Channel.

11.25 As shown in Figure 9.1 (in Chapter 9 above), the Severn Estuary MCA, SPA, Ramsar and SAC can be found at the eastern end of the Vale and is of international significance for overwintering birds.

11.26 The Glamorgan Coastal Waters and Nash Sands MCA comprises the coastal waters of the Glamorgan coastline, stretching from the expansive sand dune system of Merthyr Mawr in the west to the fringes of development at Barry in the east. The south and south-west facing coastline is a renowned Heritage Coast (see Chapter 10 above). The coastline is home to varied birdlife, including choughs, fulmars, bartailed godwits and peregrine falcons.

11.27 Cwm Nash displays a 12,000-year-old sequence of geological deposits containing abundant fossil snails – allowing for the reconstruction of climate change from the last glacial period until the present day.

Registered Landscapes of Outstanding and Special Interest in Wales

11.28 The landscapes of Wales have been formed by natural processes and shaped by human activity. This human activity ranges from the prehistoric periods through to the modern age. To recognise the value of historic landscapes, and to raise awareness of their importance, Cadw, in partnership with the Countryside Council for Wales (now called Natural Resources Wales) and the International Council on Monuments and Sites (ICOMOS UK) has compiled a non-statutory Register of 58 landscapes of outstanding or special historic interest in Wales.[178]

11.29 The Register of Historic Landscapes is a non-statutory, advisory register. Its primary aim is to provide information and raise awareness of an initial selection of the most important and significant historic landscape areas in Wales in order to aid their protection and conservation.

11.30 Of the 58 registered landscapes there are two located within/ partially within the Vale. Llancarfan is located in the centre of the Vale, while Merthy Mawr is located to the north eastern extent of the Vale, along the revised LDP area boundary, extending into Bridgend (see Figure 11.3). 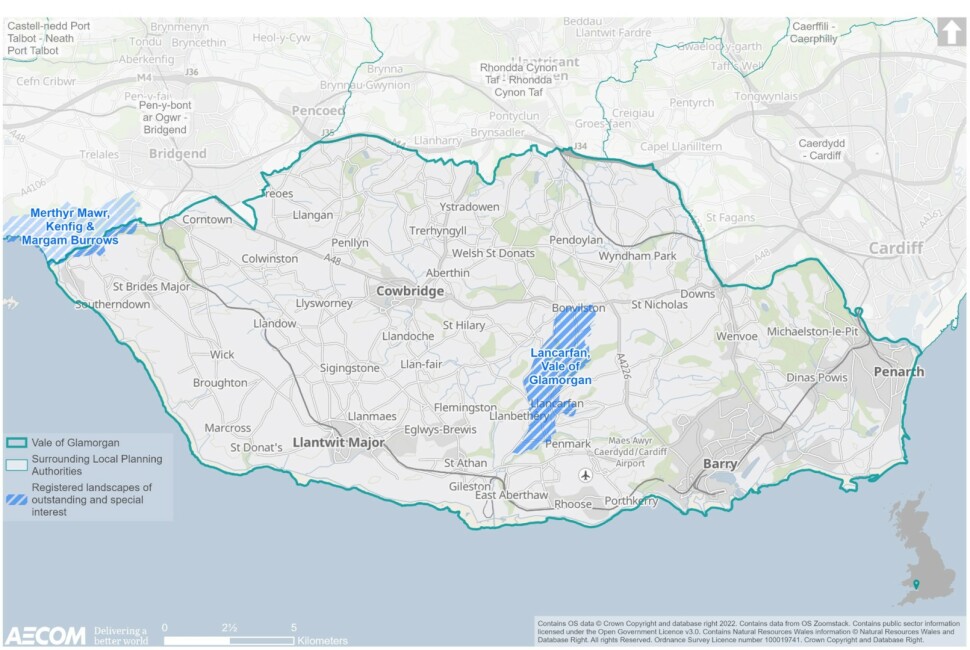 11.32 The Glamorgan Heritage Coast (see Figure 11.1 and Figure 11.4) is recognised for its national importance as an area of attractive undeveloped coastline, stretching for 14 miles, from Aberthaw to Porthcawl. The coast between Ogmore and Aberthaw is highly scenic, with a strong sense of place. Exposed limestone cliffs have extensive views over the Bristol Channel towards Somerset and Exmoor. Historic forts and lighthouses are features above the sandy beaches and rocky platforms. The often wild and open seascape, rocky shore and cliffs feel isolated in places.

11.33 The seascape has a generally southerly aspect, exposure to prevailing winds and gently shelving waters. This is combined with a build up to the high tidal range of the Severn Estuary, with the distinctive sandbank of Nash Sands and associated shoals and shallows.[179]

11.34 Farming is the foremost activity within the Heritage Coast, helping to maintain the landscape character and playing an important role in supporting the rural economy. The minor rural settlements of Ogmore and Southerndown fall within the designation and whilst being mindful of the need to protect the special qualities of the Glamorgan Heritage Coast.[180] 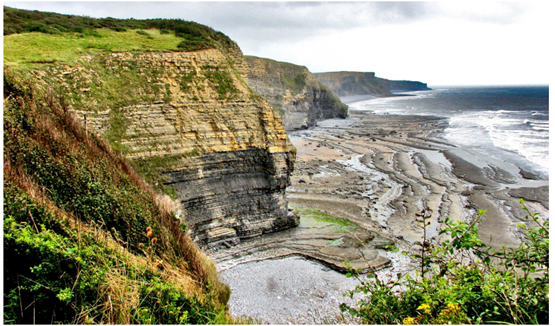 11.35 Special Landscape Areas (SLAs) are a non-statutory designation applied by the local planning authority to define areas of high landscape importance within their administrative boundary. SLAs in the Vale of Glamorgan have been designated to protect areas that are important for their geological, natural, visual, historic or cultural significance.[182]

11.36 SLAs were originally designated within the Vale based upon the Landscapes Working for Wales study in 1999. A review of the SLA designations, carried out in 2008 by TACP Consultants, identified six areas worthy of designation as SLAs. They closely followed the previous existing designated SLA's, with additional areas being included and some deleted, reflecting the updated information available. This revised methodology was devised by Natural Resources Wales in collaboration with a consortium of local authorities in South East Wales, using LANDMAP data. 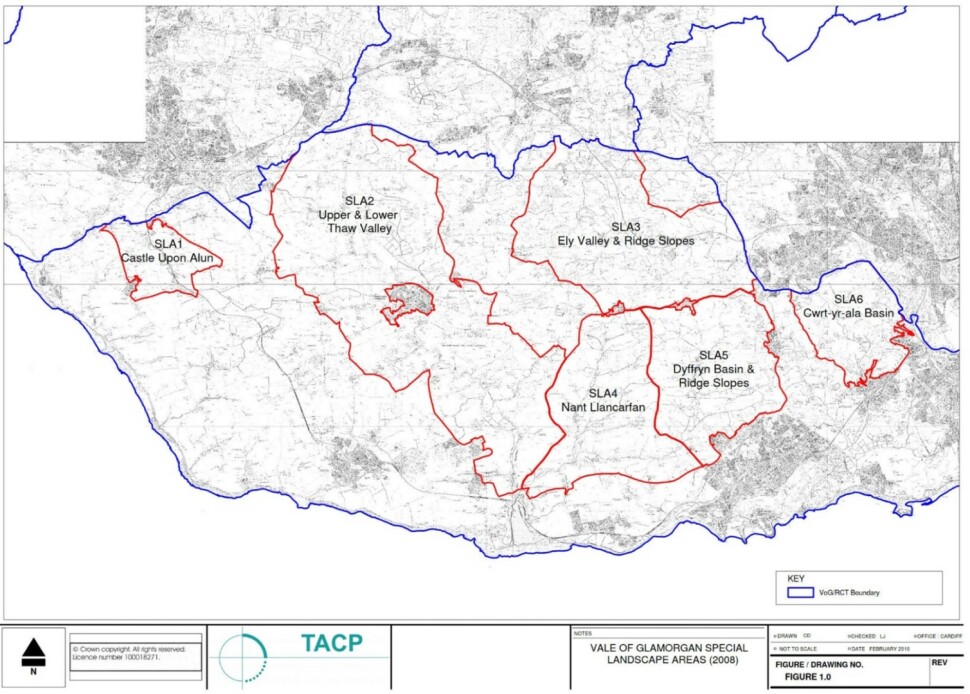 11.38 Given the extent of high quality, valued landscapes covering the Vale, new development within or within the setting of these high-quality areas (notably those areas locally or nationally designated/ recognised), will need to ensure that careful consideration is given to the design elements of the proposal. This includes the siting, orientation, layout and landscaping, to ensure that the special qualities and characteristics for which landscape areas have been designated are protected.

11.39 Without the RLDP, speculative development would continue to come forward with the potential for impacts on the landscape.

11.40 The context review and baseline information informed the identification of several key issues (problems and opportunities):

11.41 Considering the key issues discussed above, it is proposed that the ISA should include the following objective and assessment questions:

[178]Lle Geoportal for Wales (2022): 'The Registered Landscapes of Outstanding and of Special Interest in Wales', [online] available to access via this link

[182]TACP (2008): 'Vale of Glamorgan - Designation of Special Landscape Areas', [online] available to access via this link