6.2 Table 6.1 presents the most relevant documents identified in the policy review for the purposes of the RLDP and ISA.

Prosperity for all: A Low Carbon Wales

6.3 Key messages emerging from the review are summarised below:

6.4 In July 2019 the Vale of Glamorgan Council joined with Welsh Government and other Councils across the UK in declaring a global 'climate emergency'. The Council made a commitment to:[105]

6.5 While there is limited information available at a local authority level on greenhouse gas emissions, the latest statistical summary from the Department for Business, Energy & Industrial Strategy (2019) (based on data up to 2017), indicates that Wales' CO2 per capita emissions as a whole are higher than the rest of the UK regions and stand at 7.9 tonnes of CO2 per person. This is due to Wales having the highest CO2 per capita emission from the Industrial and Commercial sector (4.4t) reflecting its higher level of industrial installations. UK wide, total greenhouse gas emissions have decreased by a further 2% between 2017 and 2018 bring a total reduction since 1990 of 43%.[106]

6.6 The Vale of Glamorgan's emissions largely reflect the significant industry, agriculture and airport present. The graph below shows the CO2 emissions for the Vale of Glamorgan 2004-2018, as measured by the Department for Business, Energy and Industrial Strategy.[107] Figure 6.1 demonstrates that the industry sector has historically been, and remains, the largest contributing sector with regards to carbon dioxide. It also shows that for all sectors emissions have seen a significant decrease since 2004, although figures appear to be levelling off between 2016 and 2018.

6.7 Notably, decommissioned Aberthaw Power Station is set to be converted into a green energy hub after being purchased by Cardiff Capital Region (CCR)[108]. As such, it is likely that CO2 emissions from industry will decrease in the future.

6.8 It is also worth noting that Cardiff Airport is likely a significant contributor to transport emissions in the Vale. 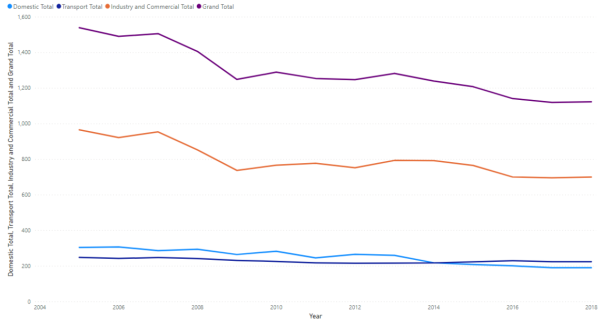 6.9 Despite emission levels shown in Figure 6.1 above, data shows that the LDP target of granting planning permissions sufficient to meet 10.6% (56.68 GWh) of projected electricity demand through renewable energy sources by 2020 has been met.[110]

6.10 The Vale of Glamorgan Council has been implementing a range of projects that benefit the environment and reduce carbon emissions (see Project Zero Challenge Plan). Ongoing commitments to emissions reductions include:[111]

6.11 As mentioned above, decommissioned Aberthaw Power Station is also set to be converted into a green energy hub.

6.12 Figure 6.2 identifies all the known renewable energy and low carbon schemes which either have planning permission or are operational as of 2019 in the Vale of Glamorgan.[112] As to be expected, domestic solar schemes are the most prevalent, with schemes located throughout the Vale; while wind energy schemes are more limited in number, and located predominately to the north of the authority. 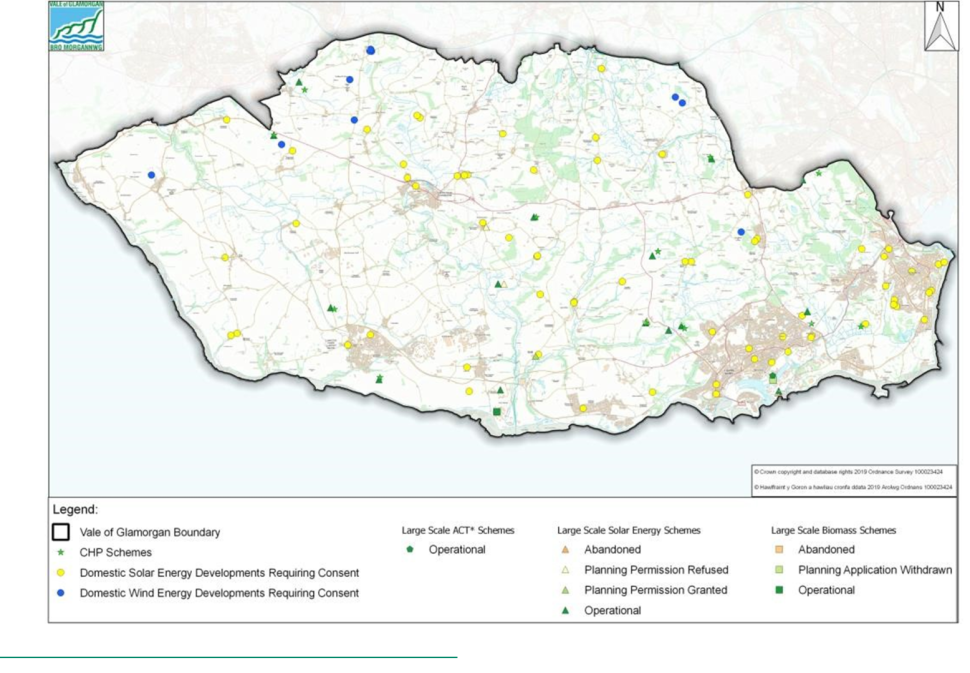 6.13 Electric vehicles have a significant role to play in securing a greener future on the roads. The transport sector accounts for 17% of greenhouse gas emissions in Wales, and only 0.17% of vehicles used in Wales are electric.[114]

6.14 In line with national commitments, Vale of Glamorgan Council are delivering EV infrastructure and supporting the shift away from diesel vehicles throughout the authority. Notably:

6.15 Climate change is predicted to have effects relating to short-term changes to weather patterns as well as longer-term shifts in climatic trends. Weather patterns are predicted to see an increase in extreme weather events, including intense rainfall, heating, drought and cold snaps. Changes to climate are likely to lead to mean reductions in rainfall alongside mean increases in temperatures. It is also important to consider the seasonality of these shifts, with winters in the UK likely to be warmer and wetter and summers expected to be warmer and drier. Another consequence of climate change is rising sea levels, an issue which is exacerbated by storm surges which can lead to coastal flooding and erosion. Climate change adaptation refers to the actions taken to manage impacts of climate change by reducing vulnerability and exposure to its harmful effects, as well as exploiting any potential benefits.

6.16 The Vale of Glamorgan Local Flood Risk Management Strategy (LFRMS) (2013) focuses on 'local flood risk', defined as flooding caused by surface runoff, groundwater and ordinary watercourses (streams, ditches etc).[115] This type of flooding was the cause of most of the damage of the local floods of 1998, 2000 and 2007 and need to be taken as seriously as flooding from main rivers or the coast. Since 2007 the Vale of Glamorgan has experienced further flooding and extreme weather, affecting most of the authority due to the widespread nature and duration of events.[116] More recently, in December 2020, significant flooding occurred in Dinas Powys and Sully. The Council subsequently undertook formal Section 19 flood investigations in relation to this flood event and the relevant reports are available on the Council's website via this link.

6.17 Main river flooding accounts for the majority of all recorded flood events in the Vale of Glamorgan. As shown in Figure 6.3 below, fluvial flood risk extends throughout the Vale, mainly following the river corridors, and overlapping with settlements to some extent. The communities at highest risk from flooding are Cowbridge, Dinas Powys and parts of Barry, including Barry Docks and Atlantic Trading Estate. Llantwit Major is also at risk. 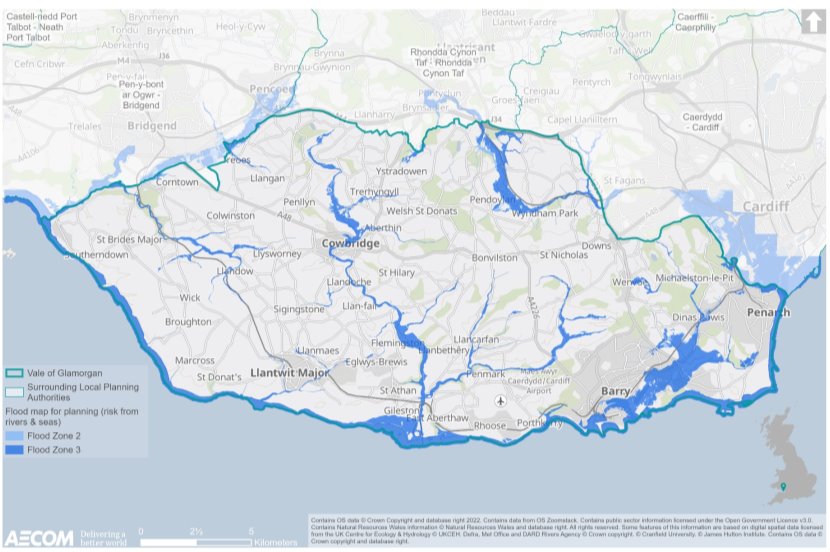 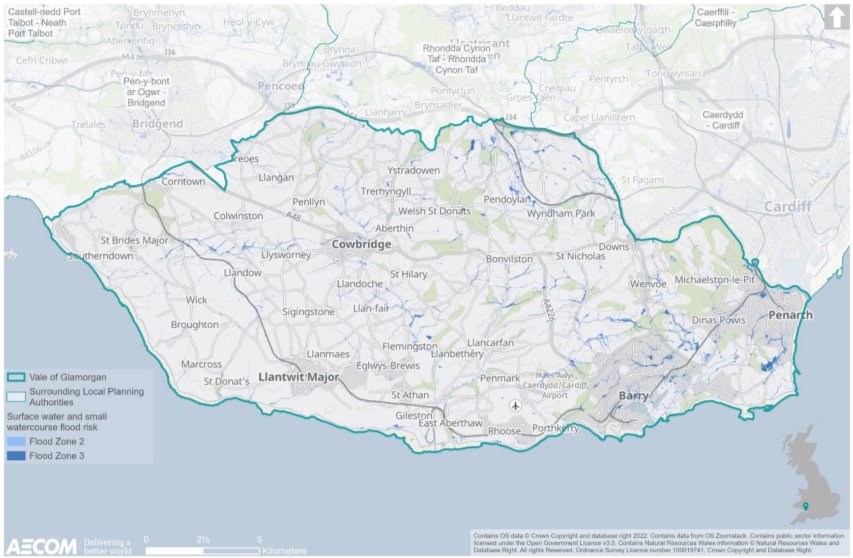 6.20 Figure 6.5 below shows areas in the Vale that benefit from flood defences that protect against flooding from Rivers and the Sea. These are located in Cowbridge and to the northeast of Barry, coinciding with flood alert areas. A Flood Alleviation Scheme (FAS) has reduced the level of flood risk within the main urban settlements of Cowbridge and Llanblethian. Elsewhere, informal defences provide protection where individual properties are at risk.[119]

6.21 The areas shown benefit from different levels of flood protection, and this is recognised in the risk classification shown in the Flood Risk Assessment Wales (FRAW) map.[120] It is noted that this is not property specific and shows the benefit for a general area. However, Figure 6.5 does also show specific flood defences that have been built, coinciding with flood defence areas, in addition to being located along the eastern and southern RDLP area boundary.

6.23 Natural solutions to reducing flood risk can come in the form of green infrastructure, including tree cover. Permeable surfaces provided by greenspace help to reduce surface water runoff, which in turn helps to reduce flood risk. Trees provide interception, reducing the volume of water reaching the ground during rainfall events, helping to reduce flood risk. In this sense, it is important to look at the levels of green infrastructure and its management within urban areas, including the soil resource, path networks, urban woodlands and other green infrastructure aimed at enhancing the quality and accessibility of the local environment. Note that rural areas are generally open countryside which are less likely to have issues relating to surface water runoff.

6.24 Green and open space is vast throughout the Vale, as shown in Figure 4.1 and discussed in Chapter 4 above. However, the areas of green and open space which are in direct Council control represent a small percentage, highlighting the important role of private landowners in contributing towards mitigating climate change and the sustainable management of green infrastructure.

6.25 Despite the above, the Council can still implement effective measures, which has been proven by recent tree planting schemes such as that set to take place in Barry. Specifically, this scheme plans to prevent flooding in Barry by planting more trees and reducing the amount of concrete pavement[122].

6.26 In terms of relevant mitigation opportunities undertaken by the Council, monitoring has shown that since July 2018 the Vale has secured a replanting ratio of 2:1 for the removal of trees with a preservation order (TPO) or trees in a conservation area (TCA) This is in accordance with the Trees, Woodlands, Hedgerows and Development Supplementary Planning Guidance.[123] 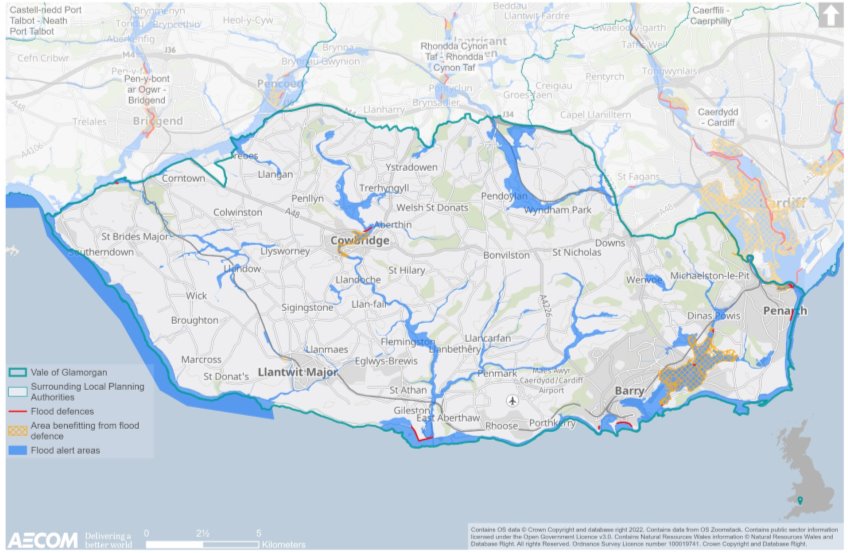 6.27 New development could potentially increase flood risk through factors such as changing surface and ground water flows, loss of mature vegetation, damaging soils, overloading existing inputs to the drainage and wastewater networks or increasing the number of residents exposed to areas of existing flood risk and potential elevated flood risks in the future. However, the surface water related flood risk would be mitigated by the Sustainable Drainage approval process.

6.28 Climatic and weather pattern changes towards higher mean temperatures and extreme heating events are likely to be seen in the future, this can be expected to have more pronounced effects upon urban areas and in particular vulnerable populations within these areas. This is likely to necessitate the pursuit of opportunities to design cooling solutions into development, such as shading by retaining and planning of trees and increased green infrastructure and ventilation.

6.30 The policy agreements and urgency with which the matter of climate change is being focused upon is likely to increase over time. This will be expected to lead to policies which restrict the use of fossil fuel emitting activities and support energy efficiency measures, helping to drive down CO2 emissions.

6.31 It is considered that opportunities for renewable and low energy generation will further increase over time. This is anticipated to be across a range of sources, as well as from sources enabled through the development of new technologies. As discussed above, this is currently being taken advantage of throughout the Vale, for example with many operational large scale energy schemes in place.

6.32 The context review and baseline information informed the identification of several key issues (problems and opportunities):

6.33 Considering the key issues discussed above, it is proposed that the ISA should include the following objective and assessment questions:

Assessment questions – will the policy/proposal help to:

Support the resilience of Vale of Glamorgan to the potential effects of climate change, including flooding from fluvial, coastal and surface water sources.

Reduce Vale of Glamorgan's contribution to climate change from activities which result in greenhouse gas emissions and contribute to meeting the Council's target of net zero.

[116] Vale of Glamorgan Council (no date): 'Community Flood Plan and Extreme Weather Guidance', [online] available to access via this link

[121] Vale of Glamorgan (no date): 'Flood and Coastal Erosion Risk Management', [online] available to access via this link