9.1 This theme focuses on biodiversity and geodiversity interests within and surrounding Vale of Glamorgan.

9.2 Table 9.1 presents the most relevant documents identified in the policy review for the purposes of the RLDP and ISA.

Table 9.1 Plans, policies and strategies reviewed in relation to biodiversity and geodiversity

The Biodiversity and Resilience of Ecosystems Duty Report

9.3 Key messages emerging from the review are summarised below:

9.5 The locations of these sites are shown in Figure 9.1 at the end of this Chapter. Further details on each of these designated sites is presented below.

9.6 In the south of the Vale, the Severn Estuary SAC (also aRamsar wetland site of international importance), is an important area for wintering wildfowl and waders, and a Special Protection Area (SPA). The estuary also supports internationally important populations of migratory fish.

9.7 Annex I habitats and Annex II species that are a primary reason for designation of this site are:[158]

9.8 Dunraven Bay SAC is part of Southerndown Site of Special Scientific Interest (SSSI) and is designated due to the presence of the rare shore dock, one of the rarest plants in Europe.

9.9 Annex II species '1441 Shore dock' is the primary reason for designation of this site. The 20 or so plants of shore dock (Rumex rupestris) growing here on damp coastal limestone are the only remnant of the species' former Bristol Channel range. The species has disappeared through loss of damp dune-slacks and shingle banks from other sites at Merthyr Mawr, Kenfig, Braunton Burrows and Pennard but is relatively secure on this steep, inaccessible site. The Dunraven Bay population is a significant seed-source for recolonisation of Bristol Channel dunes and beachheads when future management restores these habitats to favourable condition.[159]

9.10 While outside of the local authority boundary, it is noted that the Kenfig SAC is located within Bridgend County borough and lies adjacent to the Vale of Glamorgan. It is a largely intact dune system with extensive areas of fixed dune vegetation.

Annex I habitats and Annex II species that are a primary reason for designation of this site are:[160]

9.11 Nationally designated sites include Sites of Specific Scientific Interest (SSSIs). There are 28 SSSIs present across the county borough, as shown in in Figure 9.2, designated for their biodiversity or geodiversity interest, and totalling 941ha.

9.12 In descending size order, these are:

9.14 Natural Resource Wales manage 330ha of small mixed woodlands, mostly Plantations on Ancient Woodland Sites, on behalf of the Welsh Government. Many of the woodlands in the Vale have high conservation value and some offer formal and informal recreation opportunities (most are privately owned).[162]

9.15 All woodlands in South Wales are within a Control Disease Zone (CDZ) for Phytophthora ramorum (larch tree disease). Larch trees formed a high proportion of the forestry of the South Wales and their removal is having a noticeable effect on the biodiversity and landscape in many areas.

9.16 Heritage Coasts occupy about a third of the Welsh coastline, that is 500 km (300 miles). These sites were set up to protect our coastlines from insensitive developments. Most are defined simply by the coastline between two named points, however some have clearly defined inland boundaries.[163] The Vale includes 53 kilometres of coastline including 23 kilometres of Glamorgan Heritage Coast (see Chapter 10 for further details). The Glamorgan heritage coast is rich in wildlife, including wooded valleys and supporting a diverse range of species, including breeding birds.

9.17 As shown in Figure 9.3 below, locally designated sites are present throughout the Vale.

9.18 Sites of Importance for Nature Conservation (SINCs) are identified to protect areas of high wildlife value at a local level. They are local authority planning designation relating to Policy MG33 of the adopted Local Development Plan (LDP) 2011-2026. There are approximately 360 SINCs scattered across theauthority as well as a number of candidate SINCs.[164]

9.19 Regionally Important Geological and Geomorphological Sites (RIGS) are locally designated sites of local, national and regional importance for geodiversity (geology and geomorphology). There are 12 RIGS including Sully Island and Wenvoe Quarry.

9.20 Local Nature Reserves (LNR) are owned or managed by the Vale of Glamorgan Council and there are currently three within its boundary, at Birchgrove Wood (Barry), Cliff Wood (Porthkerry), and Cwm Talwg (also Barry).

9.21 There are also seven Wildlife Trust Managed sites that cover approximately 93 hectares of land across the Vale. Additionally, there are two Woodland Trust Reserves in the Dinas Powys area, and two Country Parks at Comeston Lakes and Porthkerry (see Chapter 4). There is also over 500 hectares of common land.

9.22 Numerous species of biodiversity importance occur throughout the Vale of Glamorgan. The otter population and distribution has increased dramatically over from the 1960's and 1970's levels and is seen as a major conservation success story. The main reason for this increase has been the reduction in levels of toxic pesticides that were harmful to otters in the 1960s and 1970s, but the general improvements in water quality and consequent increase in fish stocks have probably played a significant part.

9.23 The European otter (Lutra lutra) is an important biological indicator of the health of rivers and wetlands. As a top predator monitoring the status of the otter gives a valuable measure of the state of our water and wetland ecosystems. Otters are present throughout the river systems of the Vale of Glamorgan, with particularly high levels of activity along the River Thaw and its tributaries.

9.24 The bullhead (Cottus gobio) occurs in the Vale of Glamorgan and is a small bottom-living fish that inhabits a variety of rivers, streams and stony lakes. It appears to favour fast-flowing, clear shallow water with a hard substrate (gravel/cobble/pebble) and is frequently found in the headwaters of upland streams. However, it also occurs in lowland situations on softer substrates so long as the water is well-oxygenated and there is sufficient cover. It is not found in badly polluted rivers.

9.25 Inland, the undulating managed grassland of the Alun Valley supports Wales' only population of the High Brown Fritillary butterfly.

9.26 Throughout the Vale, Great Crested Newt are widespread. The rich mosaic of habitat supports many bat species, particularly the Lesser Horseshoe Bat which has four known maternity roosts within the county. The Vale of Glamorgan also hosts a large maternity colony of Serotine Bat, a species uncommon in Wales. The large agricultural fields in the Vale are important for supporting populations of skylark and lapwing.

9.27 Despite its relatively small area, the geology, coastal location, and land management of the Vale of Glamorgan results in a great variety of habitats. 19 of the key Biodiversity Action Plan (BAP) habitats for which costed habitat plans have been prepared can be found in the Vale (see Figure 9.3). Amongst these are habitats, which are relatively rare in Wales, such as mesotrophic lakes (as at Pysgodlyn Mawr) and saline lagoons (such as at Aberthaw).[165]

9.28 Whilst the extent of most of the key habitats (such as lowland heath, reedbeds, wet woodland) in the Vale of Glamorgan is small, relative to other authorities, it is likely that ancient and species-rich hedgerows in the area make up a significant percentage of the total for Wales. Similarly, as one of the main arable areas in Wales, the extent of cereal field margins is potentially significant.

9.29 Other locally important habitats in the Vale of Glamorgan contributing to the characteristic local biodiversity, or supporting key biodiversity species include: former quarries (providing habitats for birds of prey, butterflies, plants and lichens), road verges (relict grassland species and which, like disused railway lines, can act as wildlife corridors), waste ground (such as former dockland, which is attractive to some bird species for nesting, and may include rare plants, and parks and gardens.[166]

9.30 There are also several Highway Verge Conservation Zones within the County. These include a range of species-rich grassland types with associated ditches and hedgerows.

9.31 In addition to this, country parks managed for both wildlife and the public also contribute towards habitats. 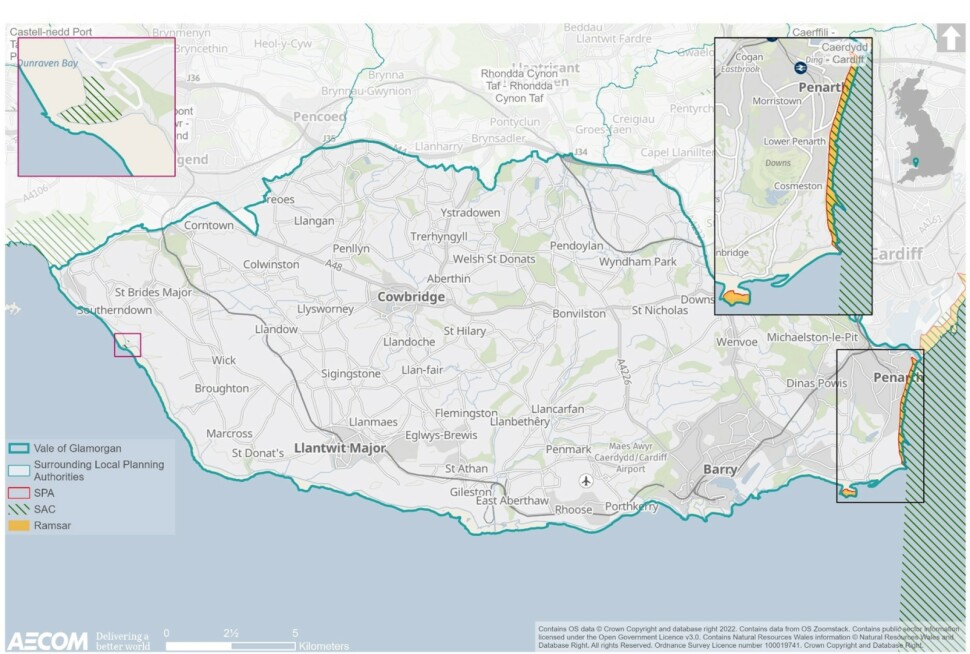 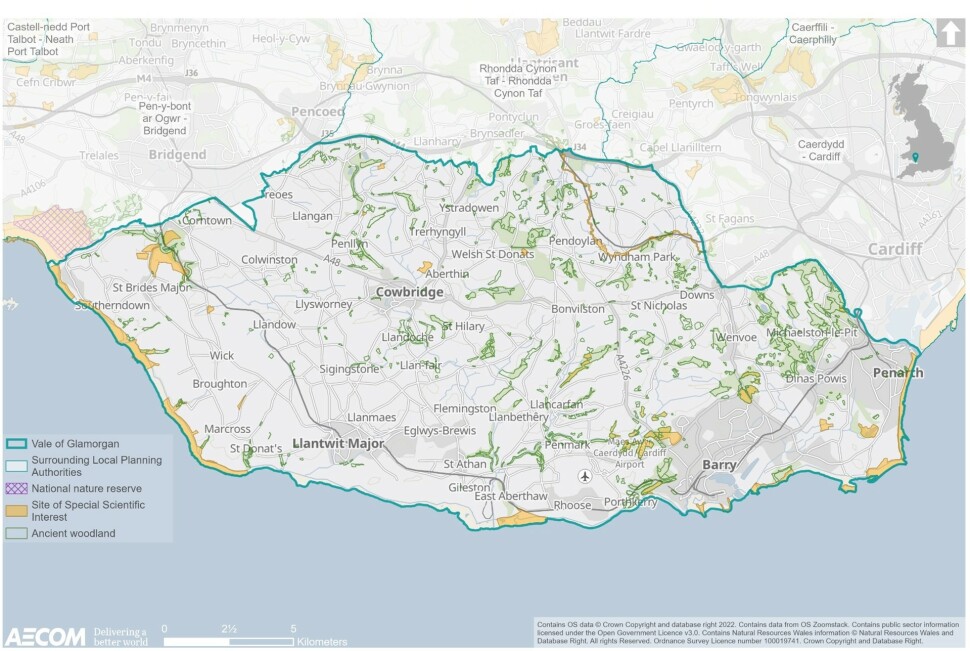 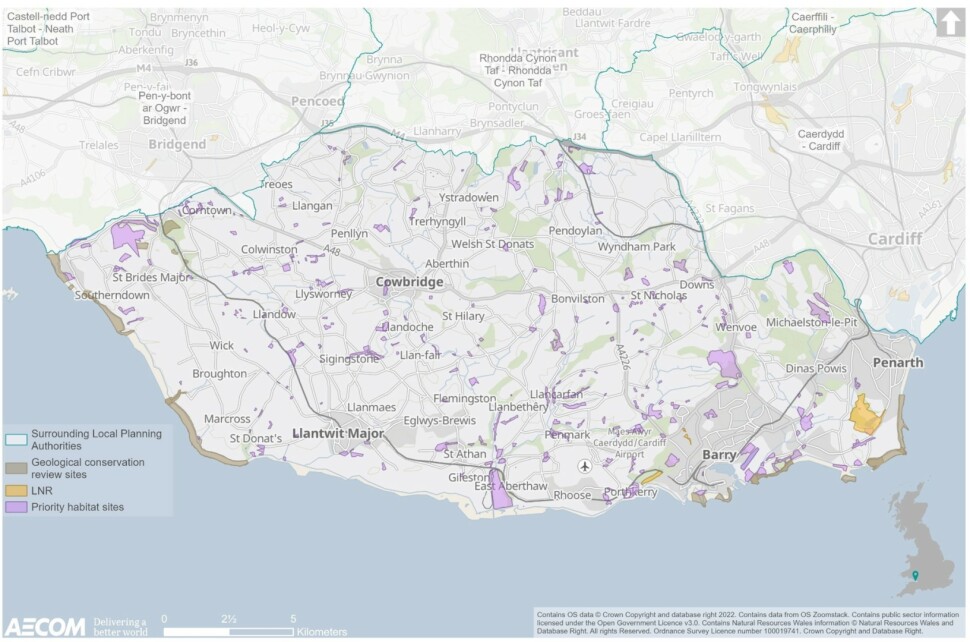 9.32 Habitats and species have the potential to come under increasing pressure from the provision of new housing, employment and infrastructure within and surrounding the plan area. This could include increased disturbance (recreational, noise and light) and atmospheric pollution as well as the loss of habitats and fragmentation of biodiversity networks. The loss and fragmentation of habitats will be exacerbated by the effects of climate change, which has the potential to lead to changes in the distribution and abundance of species and changes to the composition of habitats. This includes the loss of natural habitats or deterioration of their quality due to pressures as a result of coastal squeeze caused by erosion related to sea-level rises.

9.34 Without the RLDP, speculative development would continue to come forward under the currently adopted LDP. The RLDP provides an opportunity to coordinate the delivery of growth to meet future needs, protect and minimise impacts on biodiversity and seek strategic opportunities to deliver biodiversity net gain where possible.

9.35 The context review and baseline information informed the identification of several key issues (problems and opportunities):

9.36 Considering the key issues discussed above, it is proposed that the ISA should include the following objective and assessment questions:

Assessment questions – will the option/proposal help to:

Protect and enhance biodiversity within and surrounding the Vale of Glamorgan.