5.1 This theme focuses on the demographics and households of the population in Vale of Glamorgan, as well as deprivation, access to services and facilities.

5.2 Table 5.1 presents the most relevant documents identified in the policy review for the purposes of the RLDP and ISA.

Table 5.1 Plans, policies and strategies reviewed in relation to equality, diversity, and inclusion

5.3 Key messages emerging from the review are summarised below:

5.4 The Vale of Glamorgan is regarded as an affluent and attractive area to live and work (see Chapter 2 and Chapter 3 above), however pockets of poverty and deprivation do exist. These are reflected through the Welsh Index of Multiple Deprivation Wales (WIMD) 2019. The WIMD is a national statistic designed to identify the small areas of Wales that are the most deprived.[81]

5.5 IMD ranks all small areas in Wales from 1 (most deprived) to 1,909 (least deprived). The small areas are otherwise known as Lower Layer Super Output Areas (LSOAs). This geography is built from census data and represents small locations, each with a population of around 1,600 people. As there are 1,909 LSOAs in Wales, 190 LSOAs fall within the 10% most deprived in Wales.[82] 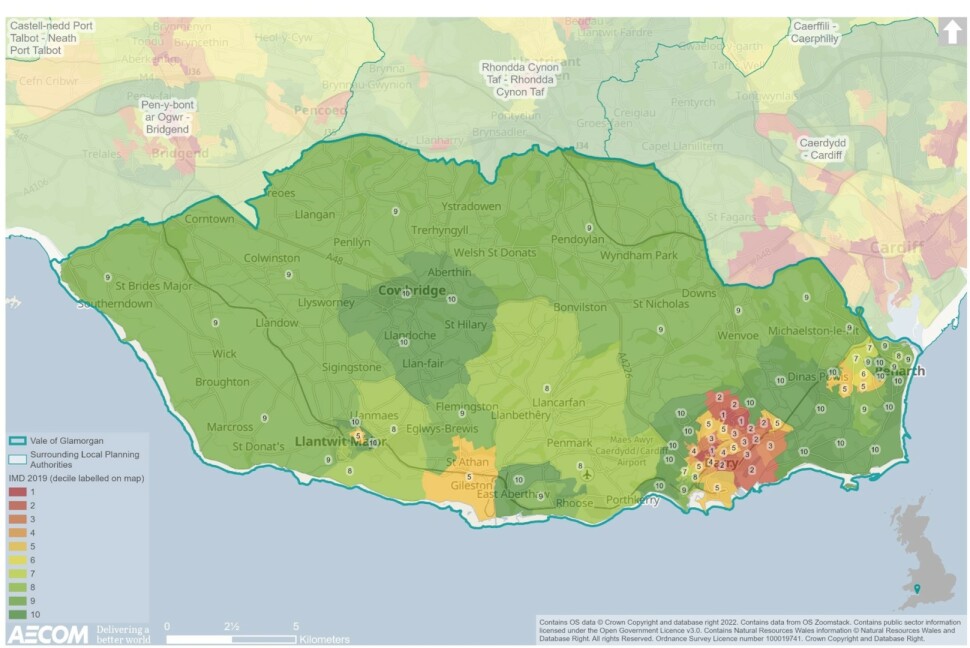 5.10 The WIMD 2019 report identifies that the Vale of Glamorgan is one of twelve local Authorities in Wales with no small areas of deep-rooted deprivation. It is important to note that an area itself is not deprived: it is the circumstances and lifestyles of the people living there that affect its deprivation ranking and it is important to remember that not everyone living in a deprived area is deprived -and that not all deprived people live in deprived areas.[85]

5.11 Deprivation across the Vale has been explored through the Vale of Glamorgan Corporate Plan (2020). Notably:[86]

5.15 Annual Population Survey data from 2018-2020 is available at the regional scale, which shows that 47.3% of people living in South East Wales recorded that they were married. This compares to 50% for North Wales, and 48% for Mid and South West Wales.[90]

5.16 Age characteristic data taken from the Census illustrates an ageing population across Wales. Between the 2001 and 2011 Census all Local Authority areas across Wales have recorded a growth population in older age categories. The Vale of Glamorgan follows this national trend, with a significant growth in the 60 to 64, 65 to 74, 75 to 84 and 90 and over age groups between 2001 and 2011.[91]

5.21 Since the publication of the Trans Data Position Paper (2009), nuances surrounding gender identity have been recognised at a national level. The 2021 Census is anticipated to include voluntary questions that depict a more nuanced understanding of sexual orientation and gender identity. These groups are more vulnerable to discrimination due to their minority status.

5.22 Key findings from Stonewall's research into LGBT hate crime and discrimination in Wales (2017) include the following:[96]

5.29 In 2011, the Census revealed that within the Vale of Glamorgan, 8.2% of the population could speak, read, or write Welsh compared to the national average of 14.6%. 83.7% of the Vale's population or approximately 122,018 people possessed no Welsh language skills at all, compared with an all-Wales average of 73.4% of the population.

Table 5.4 Percentage of people aged 3 or older who can speak Welsh, by Welsh local authority[103]

5.31 The findings of the Well-being Assessment demonstrate the wide range of factors that contribute towards creating the inequalities that exist in the Vale and the complex and inter-related factors that all contribute towards poorer well-being in deprived areas. It will be important for the RLDP to take a holistic approach to improving well-being within the authority's more deprived communities, promoting, strengthening and enhancing cultural identity in line with national objectives.

5.32 Economic regeneration, alongside community regeneration, are key factors that can transform local neighbourhoods and the lives of local people. New development throughout the Vale should therefore focus on narrowing the gap between the least and most affluent areas, by addressing areas of everyday activity including employment, health, housing, education, community safety and the environment. Furthermore, it is recognised that the Vale has an ageing population, and it will therefore be important to ensure that services can meet the changing needs of the population as they grow older.

5.33 Community cohesion is likely to be most directly influenced through detailed policies which have the granularity to deliver focused responses at specific locations. In the absence of the RLDP, it is possible that opportunities might be missed to address issues both at the local scale, and strategically throughout the county borough.

5.34 The context review and baseline information informed the identification of several key issues (problems and opportunities):

5.35 Considering the key issues discussed above, it is proposed that the ISA should include the following objective and assessment questions:

Assessment questions – will the option/proposal help to:

[87] Nomis (2019): 'Live births in England and Wales by sex and characteristics of mother: national/regional', [online] available to access via this link

[91] The Civil Partnership Act came into effect in 2005, in 2011, 0.2% of respondents (185 people) recorded that they were in a registered same-sex civil partnership in the Vale of Glamorgan.

[96] Stonewall (2017): 'LGBT in Wales: Hate Crime and Discrimination', [online] available to access via this link

[103] StatsWales (2021): 'Annual Population Survey – Ability to speak Welsh by local authority and year', [online] available to access via this link